A recent study conducted by GenderInSITE (Gender in Science, Innovation, Technology, and Engineering) in collaboration with the InterAcademy Partnership (IAP) and the International Science Council (ISC) was published in September 2021. This report included results from two global surveys. Over 120 national science academies and disciplinary associations from across the world participated in the surveys and reported on women’s science participation. The report found that women’s representation remained low from 2015 to 2020 across various countries in the world. Specifically, in the U.S., while women’s representation in the National Academy of Sciences has increased from 13% to 19%, women still comprise less than one-fifth of members of this academy.

Despite the low representation of women among academy membership, women fare better among those who govern the academies themselves. That is, women comprise 23% to 59% of the governing body across national academies of sciences in the world. For example, while the National Academy of Sciences in the United States has 17 individuals in their governing body, more than half (59%) of them are women. Similarly, women comprise the majority of the governing body of the Royal Society of Canada. However, women still represent less than half of the governing in most other countries, including Australia, Brazil, Malaysia, Mexico, and the United Kingdom. 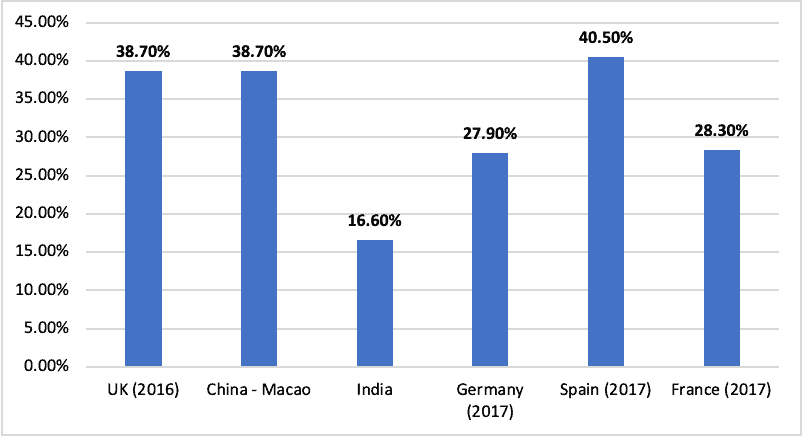 The World Economic Forum’s Global Gender Gap Report 2021 (World Economic Forum, 2021) provided an update on the gender gap in frontier roles and frontier skills as observed in data from the LinkedIn platform. These professional clusters* were identified as those with increasing employment projections from across 20 leading economies. Overall, women’s representation increased slightly across most of the professional clusters, with the exception of the People and Culture cluster. For example, their representation among those in Engineering and Data and AI increased from 15% to 20% and from 26% to 32%, respectively. While their representation among professionals in the People and Culture cluster decreased slightly from 65% in 2020 to 61% in 2021, they still remain over-represented among professionals in these roles. Additionally, women in professional and technical roles represent 61% of those in Content Production, 44% in Marketing, 37% in Product Development, and 14% in Cloud Computing.

In the most recent Global Gender Gap Report (2022), data from Coursera showed that there were distinct gender differences in online training enrollment targeting various skills. For instance, women were well-represented among those enrolled in courses aimed at developing skills in working with people (56%), self-management (53%), and business (50%). However, women were under-represented among those enrolled in courses that develop skills in digital and technology (30%), broadly, and specifically, in mathematical thinking (36%), technology design and programming (30%), and technology use monitoring, and control (29%). Additionally, the report presented information regarding the disruptive technology skills attributed to those in leadership roles using LinkedIn data. Similar to the skills course enrollment, a higher proportion of men than women attributed more importance to technology skills (9.46% vs. 6.23%).