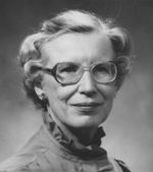 Betty Lou Bailey was born and raised in Chicago, IL.  She graduated with University Honors from the University of Illinois in 1950 with a BS in Mechanical Engineering and from the Penn State Graduate Center in King of Prussia with a M. Eng. in Engineering Science in 1967.  At the University of Illinois, she graduated in the top three percent of her class of 700 and was the only female in the class.  Betty Lou also was an active environmentalist, traveler, avid canoeist, cyclist, and hiker.

Career Betty Lou worked for the General Electric Company (GE) throughout her professional career.  She joined GE on a rotating-assignment program for new engineers that took her to Schenectady, NY as well as Erie and Philadelphia, PA.  Though Betty Lou originally planned to focus her engineering talents on household appliances, her experience as a test engineer led her to realize that she liked turbines more than refrigerators.  After completing the new-engineer program, she went to the GE Large Jet Engine Department in Evandale, Ohio and then to the Knolls Atomic Power Laboratory in Schenectady before transferring to the Spacecraft Department in King of Prussia in 1961, where she worked on the Nimbus weather satellite and the Manned Orbiting Laboratory program.  In 1969, she transferred to the GE Gas Turbine Department in Schenectady and worked in NY until she retired in 1994 after 44 years with the company.  She was a registered Professional Engineer in Ohio and New York and holds a patent for a variable exhaust nozzle.

SWE Betty Lou Bailey, SWE Pioneer, Fellow, and Life Member, was active in the Philadelphia Section from May 1961 through September 1969 when she worked at the General Electric Missile and Space Division in King of Prussia, PA.  For much of this time she served on the Executive Committee in various positions that included Section President and Secretary.  Betty Lou was committed to career guidance activities and often spoke with high school students, their parents, teachers, and counselors about what engineers do, their education and training, salaries, and the satisfaction you get from a job well done.  She was elected to the SWE College of Fellows in 1985.

Other Affiliations Betty was the first female member of the Engineering Society of Cincinnati, an organization that focused on mentoring high school students, and served as the chair of its Guidance Committee.  She has also served on national committees for the National Society of Professional Engineers, the Engineers Joint Council, and the American Society for Engineering Education.

In 1988, the Mechanical Engineering Department at the University of Illinois named her a distinguished alumna. She was the only woman to receive this award during its first 45 years of existence.

Scholarship A SWE endowed scholarship was established in Betty’s name in 2011 by SWE Region F.  SWE members and US citizens in any major and in their undergraduate and graduate studies are eligible to apply.  Preference will be given to applicants having a home address or attending at universities or colleges within the legacy Region F boundaries.

US citizenship and SWE membership required. Selection also based on financial need. First choice is for the applicant to attend a college/university within the Region F boundaries. 2nd choice would be for the applicant’s home address to be within the Region F boundaries. Region F Connecticut, Maine, Mass, New Hampshire, New York (upstate), Rhode Island, Vermont.