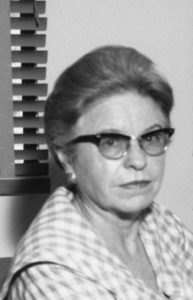 Dr. Ivy Parker was born in Quay County, New Mexico in 1907, the first of a rancher’s 6 children. Her father sent them to a one room schoolhouse and then to Tucumcari for high school where Ivy graduated in 1925. She went on to West Texas State College, obtaining a BA (Chemistry) in 1928.  Ivy went on to the University of Texas obtaining an MA in Chemistry in 1931 and a PhD in Organic Chemistry in 1935. Her graduate work was sponsored by the petroleum industry (very unusual in those days).

Career One of the first comments Ivy heard when applying for a petroleum job was “we have no facilities for women within the plant”. She started her career in 1936 at Shell Oil Company in Houston, Texas as an analytic chemist at an initial salary of $125 per month.  Ivy eventually moved on to work as a Research Engineer for the Plantation Pipeline Company in Atlanta Georgia. She specialized in corrosion and filtration, becoming a recognized expert in the field. She was known as “Doc” all along the pipeline. She taught classes at the University of Houston, Night Division.  So, Ivy went from a barefoot girl in a one room school to an internationally known expert on pipeline corrosion

SWE Dr. Parker was a long-time active member of SWE, joining in 1957 and was selected a SWE Fellow in 1982. She enjoyed career guidance and science fair activity. She was elected to the SWE Board of Trustees and later became the Chair.  She served for a total of 18 years as trustee.  Ivy’s sister Bertha was a science teacher and a strong supporter of SWE and often came to SWE National Conventions with Ivy.

Other affiliations Ivy was elected to the Georgia Academy of Science and American Men of Science. She was active in the American Chemical Society, the National Association of Corrosion Engineers. She was a member of Sigma Xi, an honorary fraternity. She became editor of Corrosion Magazine. Ivy became a Fellow of the American Institute of Chemists. She was selected a “First Lady of Petroleum” by the Desk & Derrick Club.

Scholarship Contributions from her family and friends helped endow the scholarship 1986.

Selection also based on financial need. 1 @ $1,500. A junior recipient may renew the scholarship for a senior year if she continues to meet the criteria. Availability dependent upon renewals.