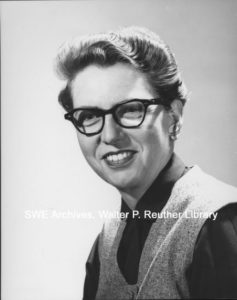 Lydia I Pickup was born in Fort Dix, New Jersey while her father was in the Army, but she claimed West Virginia as her early home. She graduated from Parkersburg, West Virginia high school in 1939. In 1942, following the US entry into World War II, she enlisted in the US Navy and went to the first WAVE boot camp in Cedar Falls, Iowa. She went to Link Trainer instructor school in Atlanta and served as an instructor in Jacksonville, Florida.  After the war, using the GI Bill, she attended the University of Wisconsin majoring in Electrical Engineering but was called back into the service just before completing the degree.

Career In 1947, she joined the Naval Reserve and after the start of Korean War, she was posted to Seattle. When released in 1953, she remained in Seattle and went to work for Boeing Airplane Company. Lydia had a 30-year career with Boeing with her primary focus on change management and configuration control. She worked on many planes and related systems from the B-52 to SRAM missiles and various phases of the Saturn program’s use for manned missions to the moon.  She was transferred for various times in the 60’s to New Orleans, Louisiana and Huntsville, Alabama. She retired from the Navy as a Chief Petty Officer in 1964.

SWE Lydia joined SWE in 1955 as a member of the Pacific Northwest Section and later became a Senior Life Member of SWE and was elected to Fellow grade in 1984. She was Chair of the 1962 National Convention in Seattle (the first four-day convention) and served in many other national positions. Lydia was elected as national SWE President for 1968-69. One goal was to visit as many student sections as she could to provide guidance.  Lydia participated in at least the first nine International Conventions of Women Engineers and Scientists.

Other Affiliations While in Huntsville, as an avid pilot, Lydia joined the “Flying Petticoats”.

Scholarship Lydia left a bequest to the SWE Scholarship Fund and the Trustees initiated the Lydia Pickup Scholarships with a preference for graduate students.