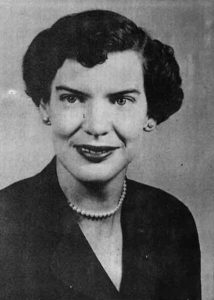 Margaret “Pritch” Pritchard was born on Pill Hill in Portland on Sept. 18, 1929. The four different homes she lived in during her life can all be found within a two-and-a-half-mile radius in the Oak Grove area.  Margaret spent most of her adult life as the main breadwinner, taking care of her brother Robert, who had Down syndrome, with the help of her mother — one of the earliest female bankers in Oregon — who retired early after having her eldest brother, David.

Career After graduating from Milwaukie High School in 1947, Margaret went to work for Pacific Gas and Electric Company (PGE) as an engineering clerk.  After learning how much more money the men were making, she applied for scholarships to attend the University of Washington.  Margaret’s career in engineering consulting focused on marrying technologies with facilities across industries. Her international career in energy, food, and wastewater engineering took her to Canada, Italy, Bermuda, England and all 50 states, enabling Margaret to join the first frequent flier program.

SWE Margaret was a SWE Life member and named a SWE Fellow in 1987.  Throughout her over 55 years of membership, Margaret served in numerous capacities including National Archives Committee Chair and Region J Director in FY02/03. She was involved in the planning and execution of the first International Conference of Women Engineers and Scientists (ICWES), which SWE hosted in 1964 in New York, and enthusiastically attended subsequent ICWES meetings across the globe.   Margaret was also instrumental in establishing the “Over the Hill” tradition at the SWE’s Annual Conference and rarely missed a gathering.

Other Affiliations Margaret was a voting member of the Oak Grove Community Council.  She was the treasurer of the Welsh Society (her father's heritage) and a board member for the Sons and Daughters of Oregon Pioneers. She also was on the Oak Lodge Sanitary District Advisory Committee, a 15-member group that helped develop master plans for the sewer district.

After moving into the assisted-living facility at Rose Villa in 2006, Margaret continued her extensive volunteer activities.  She managed the retirement center’s Green Committee for nine years.  Margaret estimated that she cut $90,000 off the annual Rose Villa water bill the first year they started charting water use because what had been considered "springs" actually were leaks on the 22-acre property.

Scholarship Margaret “Pritch” Pritchard Memorial Scholarship was established in 2019 by SWE Region J.  SWE members pursuing an engineering degree in their undergraduate studies at universities or colleges in legacy SWE Region J boundaries are eligible to apply.  The scholarship amount is $1,000.