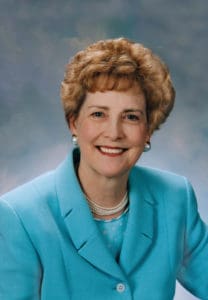 An expert in solid propellant rocket motor design, Mary Jones serves as a role model for women in the engineering profession. Only the third woman to study Mechanical Engineering at Virginia Polytechnic Institute (also known as Virginia Tech), Mary often tutored her male classmates before graduating with honors in 1962. Mary was the first women licensed as a Professional Engineer in Virginia, and she went on to earn a M.S. in Mechanical Engineering at the George Washington University.

Career She began her professional career as a structural engineer for Atlantic Research Corporation (ARC, later part of Aerojet Rocketdyne), which developed rocket propulsion systems. Mary was recognized as an expert in solid propellant rocket motor design and was ARC's Chief Design Engineer overseeing development of motors for the Multiple Launch Rocket System (MLRS), the Stinger Missile, and the Tomahawk Booster. She also served as the Executive Director of Engineering for Aerojet.  Mary retired in 2008 after a 46-year career.

SWE Mary has been a SWE member since 1961 and was named as a SWE Fellow in 1998 for her contributions in supporting women in engineering. She is a member of the Baltimore Washington Section where she has served as the section President and Section Representative.  Mary started the SWE collegiate section at Virginia Tech and was the advisor for many years.  She is now affiliated with the SWE collegiate section at George Mason University.  She received the SWE Upward Mobility Award in 1992.

Scholarship Mary endowed this scholarship in 2013 for female engineering graduate students. Aerospace, Manufacturing, Materials, and Mechanical Engineering majors at Virginia Tech, University of Virginia, Penn State, Georgia Tech, and Purdue are eligible to apple. Her hope is that this will help encourage a woman to pursue a career as an engineering professor.  She has also endowed a similar fellowship at Virginia Tech.