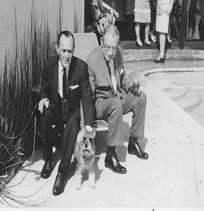 MASWE was formed in 1968 by the husbands, brothers, fathers and colleagues who believed that engineering is a viable career choice for women and the cause needed support. [This was before SWE accepted male members] Members paid “dues” as a donation to SWE of $20 and had to be sponsored by a SWE member. By 1972 there were 33 members. In 1971 MASWE established a scholarship with a stipend of $200 for a woman engineering student based on scholarship and financial need. It was established in memory of Herbert (Bud) White, husband of Winnie White SWE’s first Executive Secretary. Bud had been the first President of MASWE. On a side note when Bud was a student at Renssalaer Polytechnic Institute there was one girl in the school allowed in on special privileges since the school was not coed. That “girl” went on to become SWE’s 4th President, Lois Graham.

Minutes from MASWE stated:  “Purpose: to give maximum MASWE recognition to a student and thereby publicize the fact that men support women engineers.  To have MASWE give a specific award which we believe will assist in our efforts to increase membership”

When SWE opened to male membership in 1976 MASWE disbanded, most MASWE members became SWE members and the funds were transferred to SWE and the scholarship name changed to the MASWE Memorial Scholarship. The funds were to be turned over to the Board of Trustees when sufficient funds were gathered to make it sustainable.  It was decided that retaining the name MASWE would serve as a memorial to those men who were so supportive in the beginnings of SWE.  The funds were transferred to the Scholarship Endowment Fund in 1983 with $2018.55 to sustain a $200 scholarship.

When Winnie White, SWE’s first Executive Secretary passed away a continuing sequence of contributions over a number of years from a Trust (a family connected who wished to remain unpublicized) were made to the MASWE Scholarship in her memory. On occasion a donation in memory of a past MASWE member was received on their death. In 1996 the Boston University Student Section donated $1000 to the MASWE Scholarship. All these contributions led to a reality beyond the dreams of the original members to have at least a $1000 scholarship…as of 2013-14 there are four MASWE Memorial Scholarships at $1500 each.

Selection also based on financial need.