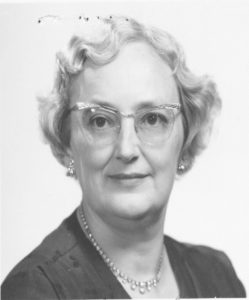 Career Following college she became a Graduate Assistant at the university and then worked at the Central Nebraska Public Power District. In an interesting sign of the times she was a Secretary for the University but also did some hydraulic studies.  In 1937 she moved to Seattle and went to work for Boeing Aircraft. In 1941 she went to the Corps of Engineers in Mobile, AL, then back to Seattle, Washington and finally Portland, Oregon and was involved in a great variety of civil engineering projects involving hydrologic investigations and research as a Hydraulic Engineer.

SWE Meredith was active in the Pacific Northwest Section of SWE serving as Section President and later Section Representative. She became a Senior Member in 1964. She went on to serve on the national SWE Executive Committee. She was a frequent attendee at SWE National Conventions.

Other Affiliations Meredith was also active in the American Society of Civil Engineers serving as Chairman of the   Hydraulics, Waterways and Harbors Group. She was also a member of the American Geophysical Union and the Society of Military Engineers.

Meredith was active in church work, Toastmistresses and enjoyed the Portland Symphony and the Civic Theater.