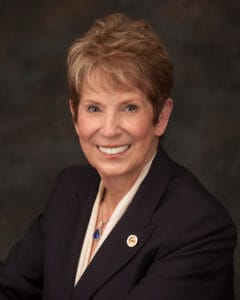 In 1960, Roberta achieved her B.S. in Chemical Engineering at Purdue University as a lone woman grad.  Unfortunately, it took about 20 years for the engineering world to be more widely accepting of women engineers in the workplace.  Patience is a virtue, and from 1980 to 2020, Roberta was joyfully part of The Aerospace Corporation engineering team.  In 1986 at the University of Southern California, she earned her M.S. degree in Engineering Systems.

Roberta is married to an aeronautical engineer and fellow Boilermaker.  They have one daughter, two sons, and three grandchildren who all encouraged her to “Make a Difference.”

Career At The Aerospace Corporation in Los Angeles, Roberta was responsible for spacecraft engineering elements on the Space Based InfraRed Satellite as well as other programs. She received an Aerospace Group Achievement Award for her work on Department of Defense/NASA contracts.

The US Congress, the US Department of Labor, as well as the National Academy of Engineering requested her to discuss issues related to technical women in the workplace.

SWE The Society of Women Engineer was only a few years old in 1956 when Roberta became a SWE student member.  She has served SWE in many capacities from President of the local Los Angeles Section and Director of the Sonora Region up to the Society level positions including Awards & Recognition Chair, Vice President of Student Services, and finally Society President.  Roberta became a SWE Fellow in 2000.

Other Affiliations Roberta was also CEO of the Global Institute for Technology & Engineering and Vice Chair of the American Association of Engineering Societies. She served the National Science Foundation both on Federal Advisory Committee and as an evaluator of NSF engineering research grant proposals.

Roberta has received numerous awards including The Aerospace Corporation Woman of the Year; YWCA Leadership Award, and Chi Omega National Woman of Achievement Award.  Purdue University Library recruited her to be the third woman (with Amelia Earhart and Dr. Janice Voss) to join the new Purdue Women’s Archives with the Roberta Banaszak Gleiter Collection.  In 2008, Roberta received Purdue’s Outstanding Chemical Engineer Award, the 7th woman to receive this award in over 100 years.