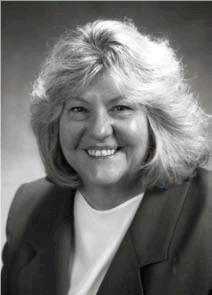 Judy received her BS in Chemical Engineering from Purdue University in 1965 and had graduate credits in business administration from Xavier University.  Judy was married to Robert Simmons and had two children, Ann and Paul Simmons.

Career After she had her first child, Judy pioneered part-time technical work at Procter & Gamble in Cincinnati, maintaining her technical skills and volunteer involvement. While at P&G, she obtained patents for her work on automatic dishwashing detergent. Simmons also worked for Tencon Inc. of Milford, Ohio, as a project manager.

SWE Judy, a Fellow and Life member of SWE, served on many levels within the Society.  Her longest role was Region G Treasurer for 23 years.  She also was on the SWE Board of Trustees from 2003-2007.  As founding member of the South Ohio SWE Section, Judy served as section president and section representative.  In 1977, Judy co-chaired the SWE National Convention in Cincinnati.

Other Affiliations Over the years, Judy exemplified the spirit of SWE with her passion for and involvement with career guidance.  Judy participated in the University of Dayton’s Women in Engineering Program for high school students; the Hamilton County Board of Education Science Committee, promoting science class requirements in the high schools; coordination of the Certificate of Merit program in high schools; and the University of Cincinnati SWE Collegiate Section.  She was also the first woman elected president of the Technical and Scientific Societies Council of Cincinnati and served on the board of directors for the Engineers and Scientists of Cincinnati. She supported the women’s re-entry program, working closely with the Office of the Dean at the University of Dayton.

Scholarship  The Judy Simmons Memorial Scholarship was created by the South Ohio SWE Section in 2010.  With support from the Simmons Family, the Judy Simmons Memorial Scholarship became a SWE endowed scholarship in 2014.  In 2018, additional funds were added from Region G during the dissolution of Regions. SWE members in Kentucky, Ohio, West Virginia, or the western half of Pennsylvania in their undergraduate or graduate students and pursuing any major are eligible to apply.

SWE membership required. All colleges and universities with an active SWE section within Kentucky, Ohio, West Virginia, and the western half of Pennsylvania.