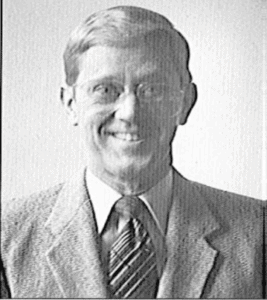 B.J. Harrod ably and enthusiastically served as Managing Director and acting Executive Director of SWE from 1984-1995 when SWE HQ was located in the United Engineering Center in New York City.

B.J. was the first affiliate member of SWE, joining in 1988.  In 1996, he was awarded an honorary life membership by the Council of Section Representatives in recognition of his outstanding service. He served as SWE’s Representative to the American Association of Engineering Societies and the Engineering Societies Library. In conjunction with SWE members, he successfully developed the NASA grant program to provide funding for outreach programs for minority and at-risk female students.

In 1997, B.J. received SWE’s Rodney D. Chipp Memorial Award for “service to SWE above and beyond the call of duty with sincere devotion to the organization, its members and its objectives”. This award celebrates a company or man who has contributed significantly to the acceptance and advancement of women in the engineering fields.

Prior to his SWE employment, Harrod held numerous responsible positions with the American Association of Engineering Societies and the American Society of Civil Engineers as well as two music publishers.  After graduation with degrees in music and English from North Texas State University and Indiana University, He taught in junior high and elementary schools.  He was elected into Alpha Chi and Phi Beta Kappa.