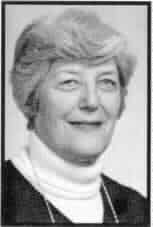 BK (as she was always known in SWE) was born on the 4th of July, 1923 in Kansas City, Missouri and passed away in 1989. She received a Bachelor of Science in Engineering Physics from University of Kansas.  Throughout her career, she continued her education by taking numerous specialty courses.  BK had a large extended family that she cherished.  She had a great sense of humor and a special bumper sticker on her car: "Women are leaders, you are following one"

Career BK Krenzer worked as a civilian for the USAF and then as a consultant in areas of electronics including instrument systems, signal data processing and intelligence analysis. At various time she worked as an electronics engineer, a Program Manager and an Intelligence Analysis Engineer. She served for more than 38 years in numerous complex assignments. Later she set up her own consulting firm.

SWE BK was selected as a SWE Fellow in 1983. She was an active MAL (Member-at-Large) and served as MAL Newsletter editor for many years. She was instrumental in forming the Kansas City Section in 1982 and was elected as SWE National President for 1986-87.  BK was an active attendee at ICWES (International Congress of Women Engineers and Scientists).

Scholarship The scholarship was initially funded by her beloved peers in the Members-at-Large group of SWE (these are SWE members who do not live near a Section).