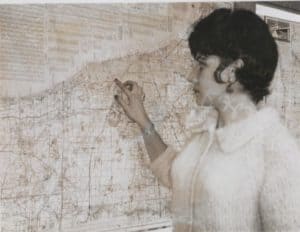 Elizabeth Jackson McLean made significant contributions to civic life in the city of Chicago and was one of the first women to advance in her field.  She graduated with honors from the University of Wisconsin in 1954.  Elizabeth was the only woman in her engineering classes and number two in her class overall.  Elizabeth was married to Charles McLean and had two children, Carian and Kristina.

Career Elizabeth began her career as an associate planner for the City of Chicago and was later promoted to Chief Research Engineer for the Department of Public Works.  In 1967, Mayor Richard J. Daley named her Assistant Commissioner of Public Works. Elizabeth received distinguished service citations from the University of Wisconsin for outstanding achievement in her field at the 25th annual Wisconsin Engineers day dinner held on the Madison campus.  In 1973, Mayor Daley appointed her First Deputy Commissioner.

During her tenure with the Department of Public Works, Elizabeth undertook the Chicago Beautiful Campaign, drafted legislation to establish the Regional Transportation Authority, and worked to procure federal funding for Chicago’s State Street Mall.  Elizabeth designed mass transit lines through the middle of the Kennedy and Dan Ryan Expressways.  She was not only a gifted engineer but was admired by her coworker as a good writer since her studies and grant applications were highly effective.

Elizabeth retired from her position with the city of Chicago in 1986.  She then founded EJM Engineer with her husband.

SWE Elizabeth joined SWE in 1960.  She was very active in the Chicago Regional Section in the 1960s.  In 1962, Elizabeth was the SWE National Convention Chairman.

Scholarship The Elizabeth McLean Memorial Scholarship was established to support SWE members in their undergraduate and in the field of civil engineering.