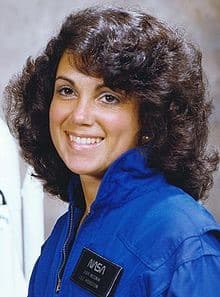 Judith Resnik was born in 1949 in Akron, OH and graduated from Firestone High School with a perfect SAT score. She excelled in mathematics and classical piano Judith then attended Carnegie Mellon University receiving a BS, with honors, in Electrical Engineering in 1970.  She was Tau Beta Pi in 1969. She pursued graduate studies at University of Pennsylvania and then received a PhD in Biomedical Electrical and Engineering from the University of Maryland.

Career Judy worked for RCA in missile and space related work 1970-74. She became a Biomedical Engineer and Staff Fellow at National Institute of Health in Bethesda, MD in 1974 and then a Senior Engineer for Xerox.  She became an Astronaut candidate at the Johnson Space Center in 1978. Judy was the 2nd female astronaut. She first flew on the Discovery shuttle in 1984 as a Mission Specialist. During the flight, she was acclaimed for her weightless acrobatics and a playful sense of humor, once holding a sign reading "Hi Dad" up to the camera, and displaying a sticker on her flight locker that advertised her crush on actor Tom Selleck.

Judy was a Mission Specialist on the ill-fated Challenger flight STS-51-L in 1986. She said “danger was simply another unknown to be mastered”. She received the Congressional Space Medal of Honor in 2004 (posthumously) and a lunar crater has been named ‘Resnik’

SWE Judy was an active SWE Senior Member for many years.  At its 1986 National Convention SWE announced the establishment of the Resnik Challenger Medal to be given to a “woman for visionary engineering contributions to space exploration”. The award was conceived as a fitting permanent memorial for Dr. Resnik.

Other affiliations Judith was also active in Institute of Electrical and Electronic Engineering (IEEE) and the American Association of University of Women (AAUW).  She became an AAUW Fellow in 1975-76.  IEEE has a Judith Resnik Award for space engineering.

Scholarship   After Judy was killed in the Challenger shuttle disaster there was an outpouring of donations from SWE members and friends to create a scholarship in memory of Judy and the Challenger event. Note:  SWE also created the Resnik-Challenger Medal to recognize a woman for visionary contributions to space exploration.