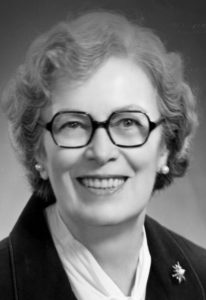 Mary was born in East Hartford, CT and secondary schools there and then graduated from  St Joseph College, Hartford with a BA in Mathematics in 1939.

Career She started her career as a teacher in the Harford school system and then joined Pratt & Whitney Aircraft as a computer assistant in 1945. By 1955 Mary was a Senior Systems Engineer in Sound involved in measurement and analysis of aircraft engine noise. Over her long career Mary worked on aircraft jet engine performance, quality assurance, performance of military engines and many other aspects of aircraft engine manufacturing. Mary retired from Pratt & Whitney in 1983 after a long outstanding career.

SWE Mary was an early member of SWE - joining in 1955, becoming a Senior Member in 1963 and a Fellow in 1994.  She served many positions in the Hartford Section, was National Bylaws Chair for many years, served a Director on the SWE Executive Committee from 1961-63 and then served as Co-chair of SWE National Conventions in Hartford in 1970 and 1986. She provided distinguished service on the SWE Board of Trustees from 1961-1988, serving as Treasurer 1980-88.

Other Affiliations Mary also was active in the St Joseph College Alumnae Association serving as President. Mary received a Distinguished Alumnae award in 1979 and later became a Trustee of the college. She served as chair of the Planned Giving Committee for the College. She was part of the Connecticut Joint Federation of Engineering Societies (first woman). Mary was also a 56 year member of the Ruth Wyllys Chapter of the DAR and an active member of Zonta International, a business and professional women’s service organization. Mary served as a member of the Connecticut Board of Optician Examiners 1987-95.

Scholarship Mary had been an avid investor and left a significant bequest to SWE to fund a Mary V Munger scholarship to be awarded to a junior or senior women engineering students   or a re-entry scholar.  Mary also left a generous bequest to the SWE Headquarters Fund.

US citizenship and SWE membership required.