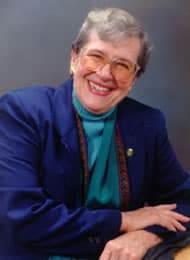 Wanda Munn has not followed a traditional career path.  After a number of years as a departmental secretary in Nuclear Engineering at Oregon State University, Wanda decided to become a Nuclear Engineer instead of typing the work of others. As a single parent, she returned to school and earned a BS degree in 1977.  She also earned an MBA from the University of Washington in 1982.

SWE Wanda is a SWE Life Member.  She was recognized as a SWE Distinguished New Engineer in 1985 and named a SWE Fellow in 1998.  Wanda was an active member and past president of the Eastern Washington Section.

Other Affiliations Wanda has received numerous awards including the McCall Life Pattern Award for women in re-entry in 1977 and the American Nuclear Society National Public Communications Award in 1988. She was also named the Tri Cities (WA) Engineer of the Year in 1993.  Wanda was admitted to the Oregon State Engineering Hall of Fame in 1999.

Wanda was a board member on the Advisory Board on Radiation and Worker Health (ABRWH) since it was first created in 2001 until 2018.  She was a member of several board work groups and chaired the Subcommittee for Procedure Reviews.  Wanda has also served on the City Council for Richland, WA.  She is a member of her local Heath Physics chapter and a life member of the American Nuclear Society.

Scholarship The Wanda Munn Scholarship was endowed by the Eastern Washington Section in 2011.  Reentry and nontraditional students in any engineering related major is eligible to apply. Geographical preference is giving to students who live in Alaska, Idaho, Montana, Oregon, and Washington.

Non-traditional. Home or school in Alaska, Idaho, Montana, Oregon, or Washington. Satisfactory completion of a minimum of two years full-time equivalent credits at an ABET accredited school. These credits do not have to be in an engineering curriculum.