By including SWE in your estate and planned giving, you play a powerful role in ensuring our resources are available for future generations of women engineers. In recognition of your commitment to include SWE in your estate plan, we will honor you as a member in our Ada Pressman Society.

Download legal information and sample verbiage to include SWE in your estate plan.

If you have already included SWE in your estate plan and would like to be recognized as a member of the Ada Pressman Society, please fill out this form and email it to funddevelopment@swe.org or mail it to the Society of Women Engineers 130 East Randolph Street, Suite 3500 Chicago, Illinois 60601-6341.

There are a variety of ways to include SWE in your estate planning and all donors can elect to direct how their gift is utilized, whether it be for a specific program, general operating support, or to exist in perpetuity through an endowed scholarship (requires a minimum commitment of $25,000).

If you have questions or want more information, please let us know by emailing funddevelopment@swe.org or contacting us at 312.596.5223. SWE highly recommends that all donors consult with their own tax or legal advisor prior to making a planned gift.

The Society of Women Engineers an organization qualified under U.S. Internal Revenue Code 501(c)(3) and is eligible to receive tax-deductible contributions in the United States. For other countries, please check with your local tax advisor regarding tax deductions of charitable contributions.

Generous individuals who commit to making a planned gift to SWE will be recognized in the following ways:

The Ada Pressman Society was created to honor and recognize one of SWE’s early members, Ada Pressman. Ms. Pressman was recognized as a pioneer in combustion control and burner management for supercritical power plants. With this expertise she managed 18 design teams for over 20 power generating plants throughout the world. One of her many notable career accomplishments was her leadership as principal engineer for the San Onofre nuclear power plant south of Los Angeles. Ada could be described as a quiet leader but no one would doubt that she was in charge. She became Chief Control Systems Engineer. At her retirement form Bechtel she was Engineering Manager. 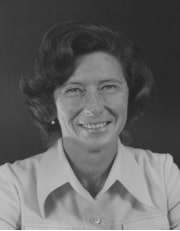 More about Ada Pressman: Ada was born in Sydney, Ohio and attended secondary schools there. She received her Bachelor of Mechanical Engineering from Ohio State University in 1950. Following graduation she joined Bailey Meter Co as a project engineer. In 1955 she joined Bechtel as a power control systems engineer. In 1969 she received a Master’s in Business Administration from Golden Gate University in California. She became a registered Professional Engineer (PE).

SWE: Ada joined SWE in 1954 as a charter member of the Cleveland Section and became a Senior Member in 1961. Ada had an active SWE “career” with the distinction of being a “three pin” president of SWE –the Past Presidents pin, a SWE Fellow pin and the SWE Achievement Award pin (1976). She was SWE President 1979-80 a tumultuous period as the Equal Rights Amendment (ERA) was being fiercely debated. Ada also received the Distinguished Service Award. Ada was elected to the SWE Board of Trustees in 1983. As Treasurer she led the Board from handwritten ledgers into the computer age.

Affiliations: Ada was also an active member of the Instrument Society of America and eventually became national President. She received the distinguished Alumni Award from Ohio State and the Outstanding Engineering Merit Award from Bechtel. She was a member of ANS and NSPE. Ada was widowed early with death of husband Marvin H Pressman in 1970. She an avid golfer and was always ready with her clubs. Ada left a very large bequest for the scholarship endowment and the BOT was able to create 6 renewable scholarships.

If you have already included SWE in your estate plan and would like to be recognized as a member of the Ada Pressman Society, please fill out this form and email it to funddevelopment@swe.org or mail it to the Society of Women Engineers 130 East Randolph Street, Suite 3500 Chicago, Illinois 60601-6341.

SWE extends a special thanks to Carolyn Phillips for authoring and collecting the biographical information about Ada Pressman.

Members of the Ada Pressman Society

The following members of the Ada Pressman Society have committed to include SWE in their estate plan:

Will or Trust Gifts

By thoughtfully remembering SWE, you can leave a legacy for women in engineering by bequeathing all of your estate or a portion of what remains after your obligations to others are fulfilled.

Download legal information and sample verbiage to include SWE in your estate plan.

There are different kinds of bequests to choose from depending on your financial objectives. By naming SWE in your will or living trust, you can also realize substantial tax savings while perpetuating your support of SWE into the future. Your donation will ensure that SWE continues to support the advancement of engineering as a desirable career for women.

Designating how your bequest will be used:

Under certain circumstances, life insurance policies can be used for charitable purposes. This is usually the case if the existing policy have outlived its original purpose. There are two ways you can make a planned gift to SWE through an existing life insurance policy:

Name as Beneficiary: If you have a policy that you no longer need for the financial security of your family you can name SWE the primary or secondary beneficiary of the policy. In doing this, your estate may be able claim a charitable deduction for the proceeds passing to SWE.

Transfer ownership: You can make SWE the owner of a policy that has been paid in full and is no longer needed. You may also incur a tax benefit through this gift.

The easiest way to include SWE in your estate plan is through making a gift from your retirement assets - 401(k), 403 (b), IRA, etc. If these funds are designated to a beneficiary that is not your spouse they will be subject to estate tax and the recipients will have to pay income tax as they withdraw the funds. To avoid these tax implications, you can make SWE a beneficiary of your retirement plan. Since SWE is a tax exempt organization there will be no income tax due upon distribution.

Making SWE the beneficiary of any or all of your retirement accounts is simple. The process requires you to you contact your plan administrator and request, fill out, and submit a form to change your beneficiary designations. You can make SWE a primary or a contingent beneficiary. Contingent beneficiaries will receive the funds if the primary beneficiary, (most often your spouse) passes away before you.

SWE - EFI (Society of Women Engineers - Endowment Fund Incorporated) operates as SWE’s Board of Trustees and manages all endowed scholarships. The minimum gift to establish an endowment is $25,000. To cover ongoing administrative and investments costs, there is a one-time fee of 10% that is requested in addition to the endowed principal of any gift (for example, for a principal gift of $25,000 the fee would be $2,500 for a total gift of $27,500).

An endowed gift is maintained in perpetuity and spending is based on revenues generated from the investment of the original gift amount. On an initial endowment for a minimum amount of $25,000, SWE-EFI strives to distribute scholarships each year in the amount of $1,000 after the endowed funds have been invested for at least 12 months. If a gift over $25,000 is made, the amount available for distribution for a single or multiple scholarships is proportionally higher.

Download a current edition of SWE’s Board of Trustees Endowed Scholarship Profiles.

In making any endowed scholarship gift, please include the legal name of SWE-EFI and our EIN: 20-2761991. For any questions, contact SWEEFI Scholarship Liaison at bot-scholarships@swe.org.

We use cookies to ensure that we give you the best experience on our website. If you continue to use this site we will assume that you are happy with it.Ok