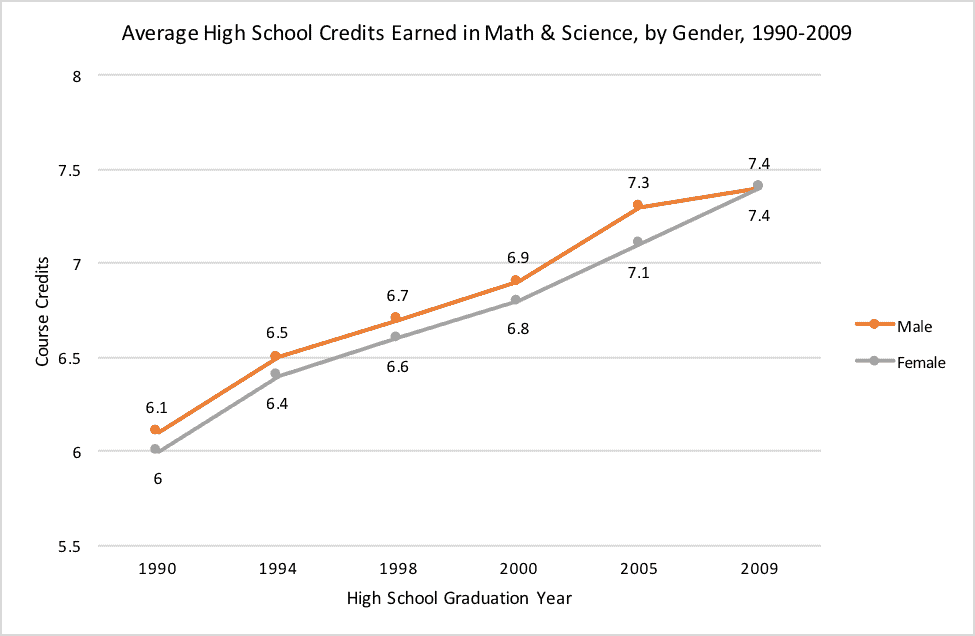 However, adolescent girls still represent a lower proportion of students taking Advanced Placement (AP) exams in STEM-related subjects, including advanced calculus (Calculus BC), physics, and computer science. Students taking AP exams are typically interested in either obtaining college credit for those courses or better preparing themselves for college. Lower rates of AP exams in math and science among girls may indicate a lack of interest in pursuing a STEM degree in college.

The National Assessment of Educational Progress (NAEP) results can serve as another measurement for understanding high school preparation. The NAEP is a U.S. measurement representing elementary and secondary students’ academic achievement in various subjects. In 2018, NAEP Technology and Engineering Literacy (TEL) responses showed a lower percentage of girls (21%) than boys (30%) in eighth grade had taken or were taking an engineering class.

In 2019, boys and girls had similar average NAEP mathematics scores at all three grade levels (4th, 8th, and 12th grades).

On average, eighth-grade girls not only scored slightly higher than their male counterparts on the 2014 and 2018 NAEP TEL assessments, but their average TEL scores significantly increased from 2014 to 2018.

Over selected years between 2005 and 2019, the proportion of boys who scored at or above proficiency level in the NAEP mathematics assessment was slightly above the proportion of girls who achieved the same feat.

In comparing racial/ethnic category and gender, eighth-grade girls scored higher or similar than their male counterparts on the NAEP-TEL assessment in 2018. However, American Indian/Alaska Native, Black, and Hispanic girls scored lower than their Asian/Pacific Islander and White counterparts.

Finally, while a higher proportion of U.S. girls (49.1%) than boys (30.7%) who took the 2018 PISA assessment expressed an interest in having a science-related career by 30, almost three times as many boys indicated they expected to have a science and engineering profession compared to girls. Most girls expressed that they expected to work in a health profession. PISA results also show a similar gendered pattern among top performers or students who achieved a high level on either math or science assessment.